This post may contain affiliate links. Read my discolsure police here.
Love Button Crafts? Last year I shared my Button Watermelon over on at Tattered and Inked.  For those of you who weren’t able to run over there and see it I would like to provide it to you on my blog today.   I loved creating this Watermelon with buttons!  I wanted something really fun and summery for my shelf that I put together.

For my shelf I am wanted fun summer colors like Yellows, reds, blues and greens with a bit of black.  The shelf was inspired by lemonade, picnics, popsicles – you get the idea.  I thought a watermelon would go great with this color scheme!

Step 1: Getting the Fabric ready – We need to get the fabric ready for adding the buttons.  Take the cardboard backing of the frame and place it on your fabric.  Cut the fabric and make sure you have a good edge to fold over.

Now we want to put this in our frame  so we have a reference on how the buttons will look with our frame on. 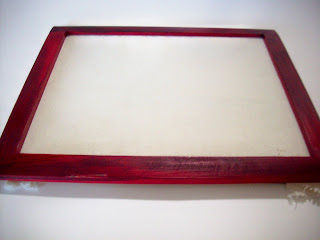 Step 2: Buttons – Now for the fun part! You get to start placing your buttons – fitting things so they look nice.  You won’t be gluing or sewing anything down yet, just placing.  I did the green buttons first.  Then I started placing my red buttons.  Before I filled the space up with my red buttons I added a few black buttons for the seeds.  I then used smaller buttons to make it look like a bite was taken out of my watermelon.

Fill in all of the open spaces.  Don’t be too much of a perfectionist as things will get moved around when you are gluing the buttons, this is just to give you an idea of where you want things.

I ended up replacing the black buttons with medium sized circle black buttons.
Now is when we start gluing.  I used elmers glue.  You will pick up each individual button and put a drop of glue on the back and then place it back on the fabric.  This takes a bit of time so put on some good music while you do this.

Yes buttons will move and things will change a bit.  I did my green buttons first and I actually ended up adding a few more buttons as things were glued down.  Before I started my red and black buttons I let my green buttons dry for a bit so they wouldn’t move to much when I picked up the red and black buttons.  Once everything is glued down let it dry.
Step 3: Sewing – Yup we are going to sew the buttons on.  I have seen button art where the buttons are just glued and if you want to do that go for it – you may want to use a different kind of glue though instead of elmers.  I am sewing my buttons for two reasons – 1 – It will secure the buttons so they won’t fall off and 2 – Because it looks so dang cute!  To sew you need to remove your fabric from the frame and untape it from the cardboard backing.  Remove the cardboard backing carefully.  On mine the glue seeped through a bit and I had to gently pull the fabric from the cardboard.  Be careful though because those buttons can fall off easily if jostled around too much.  They are just glued on temporarily until we sew them.
I used the same color of embroidery floss as button and began sewing on.  Sew cute! (pun intended)

I just love all the sewn buttons!

Isn’t that adorable!  Now put your piece back on the cardboard backing making sure to center it.  You will be taping it again but you will want to do a better taping job this time.  Now just hope no one looks at the back because the back is ugly! 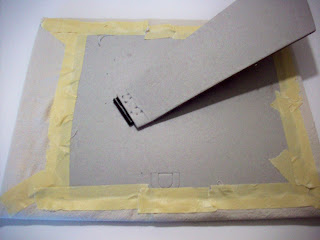 Put back in the frame and admire your handy work!  I still thought this needed something so I grabbed some black letters that were self adhesive (thickers) and spelled out the word picnic.

Here it is on my shelf

I hope you all like this project as much as I do!

« Painting and Glazing a Dollar Store Frame
Are you ready for Summer?? »