Watching grass grow is literally what I have been doing this last week and a half.  Wheat grass that is!  I have seen some ideas on Pinterest and other places about decorating with Wheat grass and I have just loved it.  With Spring and Easter here I knew that I wanted to bring this element into my home decor.  So using a tutorial I found I decided to go ahead.  My little sidekick Adison wanted to do it as well so it was a group effort.

I found this pretty planter at the second hand store and just knew it would be perfect, and it was only $3 – can’t beat that!

So I ripped out the fake flowers, glued some loose pieces of wood and then repainted it white.  I repainted it because it was yellowing in some spots.  I then added some dirt and my prepared wheat kernels. 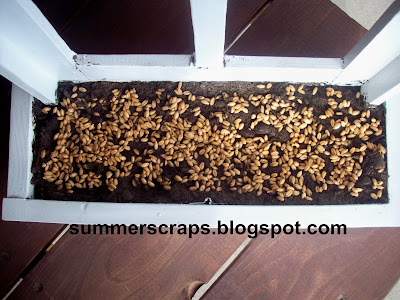 Here is a close up of the wheat kernels.  If you look close you can already see a white head starting to poke out of the kernel.  That’s the beginning of my grass!! 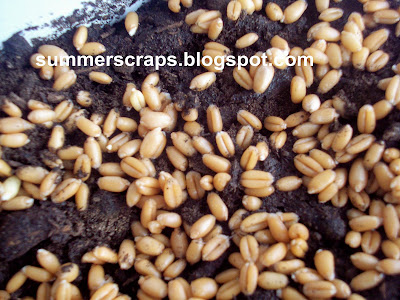 Adison planted hers in a simple can.  Now it has been about 12/13 days and I have some wheat grass to show you.  Keep in mind that our two planters have been buddies for this whole experience.  They both received the same dirt and wheat.  They both were watered at the same time with the same amount of water.  They were both put out in the sun at the same time.

Dude!  Seriously!  It’s like the Wheat Gods spat on my planter “No wheat grass for you!”

Can you imagine how pretty the grass from Adison’s can would look in my planter?  I want to put this on my mantle but it is pitiful right now.

What do you think happened?  I am thinking of trying a second time around.

Have you ever tried to grow wheat grass.  I was going to say it really isn’t that hard but if you look at my planter you might disagree.  In case you want to see the tutorial I used and some beautiful wheat grass check out the the tutorial found on the Today’s Fabulous Finds blog.

I am linking this to the following parties: